He was open about his struggles w addiction. He was found in his penthouse Mon. w drug paraphernalia. The ME will determine cause of death. A police Report source said. No signs of foul play," "No forced entry, the apartment was fine.
some source said - possibly of heroin or fentanyl Williams was found dead by his nephew in the living room of his Kent Avenue apartment in the luxury Williamsburg high-rise, the sources said.
The Flatbush native was known for his role as Omar Little on the gritty television series "The Wire" and as Chalky White on "Boardwalk Empire." Williams had spoken openly about his personal problems with drugs over the years
including during the filming of "The Wire." He said that the role of Little, who robs drug dealers, affected him in real life as well.
HBO SAID - We are devastated to learn of the passing of Michael Kenneth Williams, an HBO family member for more than 20 years. While the world knew of his immense talents, we knew Michael as a dear friend. We send our deepest condolences to his family for this immeasurable loss.
The Hollywood Reporter SAID - @THR · Sep 7 Michael K. Williams has died at 54. “It is with deep sorrow that the family announces the passing of Emmy nominated actor Michael Kenneth Williams. They ask for your privacy while grieving this unsurmountable loss,” Marianna Shafran, his PR rep, confirmed

Heartbroken 2 hear about Michael. I was just getting 2 know of his brilliance as an actor when I watched #BoardwalkEmpire and #HapandLeonard never did watch #TheWire but after reading about his character on the show, I will be binge watching it now too. #RIPChalkyWhite sonia scott @nappiloc
Michael K. W was a POWERFUL captivating actor that  exploded HIS TALENT threw the screen. U FELT his characters that put u n each scene with HIM.  Omar took us through the WIRE. Micheal lite the FIRE. He is 4 ever BLACK JOY & PRIDE. Thankful 4 our “ Soul brother “  . REST n Latin crossFolded hands
Brian Somebody
I can't think of a single thing I saw him in where he DIDN'T do a great job. Very underrated talent, and gone far too soon.
twitarican
Completely agree!  Unbelievably talented.
SandyCox I was....now for my other dysfunctions
@scbond1960
·
Spent most of the day in shock after hearing of his passing. Michael K Williams, you had me at "Omar"  Thank you for your incredible characters. You will be sorely missed RIP· 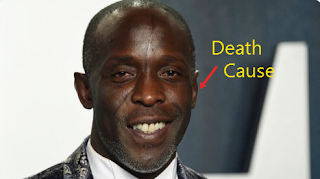