Emmerdale spoilers death video who gets shot in emmerdale

Author. Aditya    On. September 09, 2021    3232
News Viral video
Emmerdale spoilers death meena who gets shot in emmerdale - a new video has revealed that David Metcalfe pulled into the deadly situation Emmerdale’s shotgun siege is set to get even more dangerous

As the new trailer for the dramatic climax of the siege shows, he will soon become aware of what is happening below him.
As he tries to intervene, chaos ensues and the gun goes off – but who has been hit and will they die? 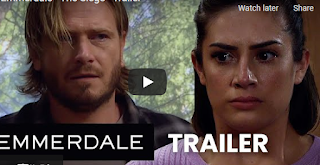 And will Russ get away with the money he is so desperate for?
The altercation has also forced Wendy to make a confession to Victoria – she isn’t actually a qualified nurse.
So, whoever is shot can’t really expect her to be much good for them anyway.
A clip for the next instalment of the ITV soap sees David becoming aware of what is happening below him in The Hide.
As he tries to intervene, the gun goes off and it looks like someone will be hurt, but bosses are keeping tight-lipped as to who that will be.
Earlier this week, Vic (Isabel Hodgins) arrived at The Hide in a bid to mend her friendship with David.
After the pair cleared the air, David went upstairs to do some paperwork, while Vic was left to deal with evil Russ.