Dr. Baden discussing possible results of Gabby Petito's autopsy. I think she may have been dead 24 days by the time she was found on 09/19/21. Her white van was photographed accidentally by the Travel Blogger on August 27, 2021. 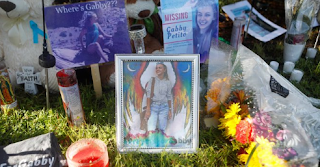 According to a separate warrant filed in a Sarasota County, FL Court, Gabby Petito's mother received a "odd text" on August 27th - a message which is described as "the last communication anyone had with" Gabby.
Petito's mother, Nichole Schmidt, said the last video chat she had with her daughter was August 24 or 25, though they exchanged text messages for a few days following. She said she is unsure if it was her daughter actually sent those text messages.
Florida police obtained the warrant to search a hard drive found in the white van that Petito and Brian Laundrie used at the time of her disappearance.
This warrant, filed by the North Port Police Department, is not associated to the activity at the Laundrie family's home.
The detective wrote that Petito's mother "received an 'odd text' from Gabby. The text message read 'Can you help Stan, I just keep getting his voicemails and missed calls.
' The reference to 'Stan,' was regarding her grandfather, but per the mother, she never calls him 'Stan.' The mother was concerned that something was wrong with her daughter."
Her family said that final message was "not normal behavior" for Petito and became more worried about her, according to police.
My heart is absolutely breaking for the Petito family. I pray that autopsy results can reveal what happened and that Brian is found and justice is served accordingly. Gabby did not deserve this.
Multiple law enforcement agencies will resume their search for Brian Laundrie in the Carlton Reserve today. We are also expecting the autopsy results from the remains believed to be Gabby Petito to be released from Wyoming today, which will answer a lot of crucial questions.
Today social media trends #justiceforgabby
top reaction -
the gabby petito case is disturbing and has made me sick to my stomach. please educate yourselves on narcissistic, gaslighting, manipulative abusive relationships. it could help save an innocent life. #JusticeForGabby
Haley
said -I didn't know Gabby.
Most of us didn't know Gabby.
But we all know a Gabby, a woman who is in an abusive and manipulative relationship and needs help.
We have to be better for the Gabby's in our lives. We have to do better.
She deserved so. much. better.
said by
@lveorlust
·
Sep 20
Brian Laundrie could have ended his relationship Gabby Petito if he no longer wanted to be with her. He could have walked away without harming her. Instead the monster decided to rob her of her life and disappear like a coward. Pure evil. Rest In Peace Gabby.
said
Gingiberz
@gingiberz
Something also very suspicious about the van.. Where'd those marks come from on the side? Looks like he's scraped past a ditch/terrain possibly? This monster needs finding now before he can hurt anyone else.  #findbrianlaundrie