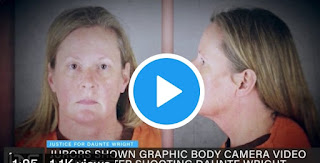 The prosecution and defence agreed that the police shooting was an accident and that Ms. Potter, a white woman, had intended to draw her Taser when she fatally shot Mr. Wright, a 20-year-old Black male, during a traffic stop.
Kim Potter has been convicted of the murder of Daunte Wright.


For the second time in Minnesota state history, a white police officer has been held accountable for killing a Black man.

The former cop who fatally shot a man in a Minneapolis suburb after mistaking her pistol for her Taser was convicted of two counts of manslaughter on Tuesday, a rare guilty judgement for a cop that will likely send her to jail for years.

Kimberly Potter, a 49-year-old white woman who testified that she had never fired her gun on the police force in Brooklyn Center, Minn., until April 11, when she shot a single bullet into the chest of Daunte Wright, a 20-year-old Black man who was driving to a carwash, took more than 27 hours over four days to reach the unanimous guilty verdicts.

Ms. Potter will be sentenced by a judge at a later date. The typical sentence for the more serious allegation, first-degree manslaughter, is six to eight and a half years in jail; the maximum penalty is 15 years, and prosecutors have indicated that they will request a longer-than-average prison term from the judge.

Mr. Wright was shown on body camera footage on April 11 getting back into the driver's seat of his automobile after pulling away from another officer who was attempting to handcuff him. A judge issued an arrest warrant for Mr. Wright that month after he failed to appear in court on a gun charge.