News of the death of 4 American Marines throws into stark relief the bravery and unimaginable sacrifice our troops shoulder when the join the US military.
Flag of United States Leaning hard on faith as I pray for the families of those who died in Afghanistan today Pentagon confirmed in a statement that “a number of US service members were killed” in the attack at the airport.

“A number of others are being treated for wounds. We also know that a number of Afghans fell victim to this heinous attack,” the statement said.
The city’s main Emergency Hospital said on Twitter that at least 60 injured people were transferred to their facility so far. 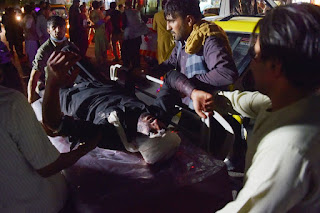 Pentagon spokesman John Kirby said one blast occurred near the airport’s Abbey Gate and the other close to the nearby Baron Hotel. Two US officials said at least one of the explosions appeared to be from a suicide bombing.
“We can confirm that the explosion at the Abbey Gate was the result of a complex attack that resulted in a number of US & civilian casualties,” Kirby said on Twitter.
“We can also confirm at least one other explosion at or near the Baron Hotel, a short distance from Abbey Gate.”
A doctor at the Indira Gandhi Hospital in Kabul said he admitted five people injured in the blasts, one of whom, a 10-year-old girl, died. Separately, Italy said that its C-130 aircraft filled with Afghan refugees came under fire at takeoff on Thursday, but wasn’t damaged. An Italian reporter aboard the plane said the pilot had to take evasive action..

Thursday’s explosion came after several of America’s allies said they were halting evacuation flights from Afghanistan, leaving behind citizens and thousands of Afghans who had been cleared for entry.
Airlift opportunities began disappearing amid warnings of an imminent terrorist attack, and as the U.S. began winding down operations in Kabul ahead of the Aug. 31 withdrawal deadline...
In a tweet condemning Thursday’s attacks, Taliban spokesman Zabiullah Mujahid pointed out that they “took place in an area where U.S. forces are responsible for security.” Still, the carnage is a direct challenge to the Taliban’s boasts of having re-established peace in Afghanistan.
Islamic State has “an interest in exposing the Taliban as incompetent,” said Tore Hamming, a nonresident fellow at the London-based International Centre for the Study of Radicalisation.
“This is a battle for authority. Both groups say that their emirs are the leaders of the global Muslim community. They cannot coexist.”