On Friday, Chesterfield Police stated that they have identified at least 13 teens that were involved with the fight. It took around 20 police officers to break up the fight and even more responded to the incident.

Many of you have undoubtedly seen the video that’s been making its way around social media of the large fight - involving dozens of students - that took place yesterday at one of our local schools. Out of respect for the innocent students and in an effort to not glorify the violence, I have elected to not share the video link.


I want to highlight a piece of this video that I found particularly compelling. Chesterfield County Police School Resource Officer Anthony Bowen used his body to shield a young man from a mob attacking a student. The officer was stuck several times in the process.

Reasonable people can disagree about the role of officers in school; however, only an unreasonable person can make the argument that students are safer in schools when officers are removed from assignments where they can build relationships with the youth in our community and come to the aid of others when threatened with violence…which, unfortunately is a common feature within all modern social endeavors.


This officer conducted himself bravely, selflessly, and without regard for his own well-being. That’s how our people are expected to perform and with rare exception, that’s how we conduct business. We are human, and we often work within challenging conditions, under great stress, and with incomplete information. We don’t claim to be perfect, but our hearts are virtuous and our mission is noble.

I’m proud of this officer, thankful for his service, and want to make it known exactly why I remain committed to ensuring our children remain safe within their learning environments. Thank you, Anthony.

Police said the large presence was necessary due to rumors of weapons being used in the fight.

Ciera Swift said she lives across the street from the school and is the parent of a sophomore there. She said she could hear students saying knives were pulled during the fight.

“One of the students was like ‘It was chaos,’ then one of them said under his breath that ‘It was a stabbing,’” said Swift.

“The way I see it is if you’ve got the kids locked down in the classrooms, obviously there’s a weapon involved,” said Swift’s cousin, Sarah Joyner.

In a video circulating around social media, school resource officers could be seen getting hit as students attacked one another in the hallway.

Multiple students said when the fight happened, everyone went into lockdown and was told to barricade in their classrooms.

Police confirmed there were no weapons used in the fight.


Despite multiple reports from parents and students seeing several students in handcuffs and one student being wheeled out on a stretcher into an ambulance, police said no one was injured, arrested or charged, and the investigation is ongoing.

“I want to share with you that we are working with Chesterfield Police to investigate the circumstances that led to an altercation among students to which staff and police responded.
The school went on lockdown while additional Chesterfield Police came to the school to assist. I sincerely appreciate that the great majority of our students were not involved, but we are very concerned about those students who engaged in the altercation. Not only did this disrupt the instructional setting and dismissal, but there are serious consequences for those who may have been involved. 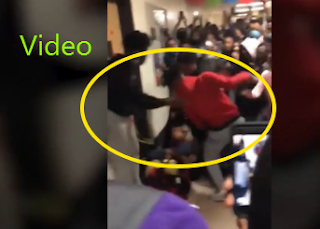 As you talk with your child, please let school administration and Chesterfield Police know of any additional information that may be important. Thank you for your continued partnership to keep our school a safe and supportive learning environment.”


“It’s just crazy and hectic. Who wants to send their children to school when these things are happening?” said Joyner. “It’s almost like you have to keep your children under lock and key because of what the world is coming to.”
Social media users said - @live_pops Alleged stabbing at Meadowbrook High School in Chesterfield VirginiaDouble exclamation mark CHECK ON YOUR KIDS ASAP