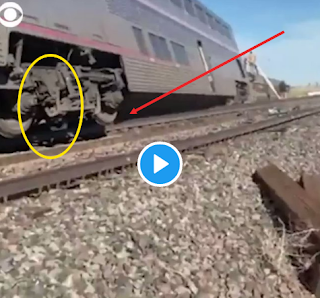 The derailment, involving five cars of the Empire Builder train, happened near Joplin, Mont., on Saturday afternoon.
At least 3 people were killed and 50 others were injured after an Amtrak train derailed in Montana on Saturday afternoon, setting off a frantic response by rescuers who scrambled to extricate passengers from cars, the authorities said.
Amtrak said that five cars on an Empire Builder train had derailed at roughly 4 p.m. local time. About 147 passengers and 13 crew members were on board, “with injuries reported,” Amtrak said in a statement.
The Liberty County Sheriff’s Office said that three people were confirmed dead.

MORE: New video shows the aftermath of an Amtrak train derailment in Montana that killed at least three people, according to the Liberty County Sheriff’s Department. Officials did not say how many total were injured in the incident. https://t.co/6Cxe5h1jej pic.twitter.com/imB3IOA0Sl

Ms. Frickel said the train, which was headed west, derailed just outside Joplin, Mont., which is about 200 miles north of Helena.

She said that rescuers from six counties were responding to the scene and that as many as five hospitals were on standby to receive injured passengers. There were also a number of medical helicopters standing by, she said.
“Everybody who is alive has been extricated from the wreck,” Ms. Frickel said.
Officials had evacuated survivors to two separate sites and were doing a head count. Emergency responders planned to put people up in hotels once their medical needs had been seen to.
“Every county around is assisting,” said Sheriff Donna Whitt of Toole County, Mont.
Amtrak said in a statement that it was “working with the local authorities to transport injured passengers, and safely evacuate all other passengers.”
Megan Vandervest, who was going to visit a friend in Seattle, boarded the train on Friday night from Minneapolis, where she lives.
Editors’ Picks
Can ‘The Wonder Years’ Break Through the White Noise of Nostalgia?
A Tour of China’s Future Tiangong Space Station
My Accidental Visit to the Pandemic’s Party Capital
Continue reading the main story

On Saturday afternoon, she was asleep in the first car when she was jolted awake.
“My first thought was that we were derailing because, to be honest, I have anxiety and I had heard stories about trains derailing,” Ms. Vandervest said. “My second thought was that’s crazy. We wouldn’t be derailing. Like, that doesn’t happen.”